Letter To Our Customers Regarding COVID-19

We accept all major credit cards

What is the AC Drain Line and How Do You Unblock It? 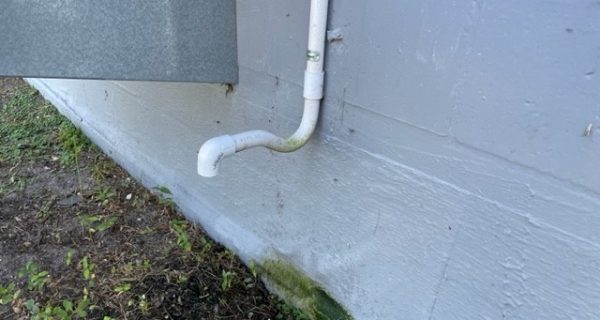 An AC drain line is the name of the pipe that transports debris and liquid from the condensate drain pan found under the evaporator coil.

The moisture and debris runs through the AC drain line outdoors or into a drain. This small pipe drains out moisture and debris to help keep the whole HVAC system working properly. As the water drips into the condensate pan and through the drain line, some other debris might join it, such as dirt, dust and other airborne particles. If too much debris accumulates, you might end up with a clog. Since the AC drain line is there to release moisture, it is also hospitable to mildew and mold which can make the blockage worse.

Leaving a pipe blocked can cause the whole system to fail, so it’s important to ensure the line is kept clean and know how to clear a clog if you find one. The condensate line is typically a PVC pipe draining outside near the HVAC if you want to inspect yours. A lot of HVAC technicians inspect and clear any debris in the AC drain line during an annual checkup if you have that service. If not, it’s worth checking yours annually, since the consequences of a blockage can include health risks from breathing in mold and mildew, as well as an expensive fee to fix it.

Problems a Clogged AC Drain Line Can Cause

A blocked condensate drain line will result in water backing up. If this moisture can’t be carried away from the drain pan, it will raise humidity levels and make the corresponding zone in your home feel muggy.

If the pan overflows, the water can cause damage to drywall and floors which, in turn, can cause the formation of mold and mildew.

Also, if moisture is allowed to stay by the unit, you might experience rust which can shorten the life of your AC system.

There are several ways you can determine whether or not you have a clogged AC drain line.

Some HVAC systems feature a sensor that will tell you if the line is blocked, although most homeowners don’t have this relatively new feature.

These are some other ways to check for a clogged AC drain line:

Can I Unclog a Blocked Condensate Line Myself?

You can probably unclog it yourself if there is very minor damage only, but if your HVAC has stopped working or you can smell mold and mildew from the vent and unit, the clog is more serious.

That would mean that you need to call an experienced HVAC technician to inspect and unblock the AC drain line for you.pipe

Get a Free Estimate
On New System Installs

Connect With Us On: